This is a very dangerous slippery slope. Science can only evolve if we look at all angles of a problem, engage in scientific debate and hear from a wide array of people who might have completely different views.

In this new series of articles, I’ll be featuring highly respected scientists who are expressing opinions about many aspects of the COVID pandemic that do not fit the mainstream narrative, and who are therefore often ignored in the media.

My goal in presenting these experts with you is not to argue that these contrarians possess the ultimate truth, but to present you with the other side — and help you reach a balanced understanding of this crisis, and empower you to think for yourself and make your own decisions.

Alexandra Henrion-Caude: World-Renowned Geneticist Saddened & Shocked That Her Colleagues Are Muzzled By Pharma-Related Conflicts of Interests

***All translations from French are mine.***

Alexandra Henrion-Caude is a French geneticist. For years, she was a researcher at the French government’s Institut national de la santé et de la recherche médicale (Inserm). She received many scientific awards in her career and has done work on epigenetics, reducing healthcare costs, glucose regulation and bioethics.

In a recent interview at TVLibertés, Alexandra talked extensively about the COVID virus, which she said “is essentially gone”. Here are some of her professional opinions:

“It’s almost as if scientists have fled this level of investigation. […] I cannot answer your question ‘what are the origins of this virus’. […] When we look at SARS-CoV-2 genome, small sequences modifying how human cells deal with the virus quickly jump to the eye.

[…] What is interesting with SARS-CoV-2 is a small sequence between S1 and S2 that is unique to this coronavirus — among all coronaviruses in humans and animals. […] This sequence happened to miraculously land right at the junction between proteins S1 and S2, which is very peculiar.

[…] This mutation is extreme bad luck. […] What is also stunning, thinking about how viruses evolve naturally, is that this sequence gives this virus a specific function in human beings: Being recognized by the human body, allowing its replication. We cannot exclude the hypothesis of natural evolution, but looking at the sequence, the most probable hypothesis is that the virus was tampered with.”

2- Chinese Scientists Recommended To Avoid Autopsies On COVID Patients, Which Could Have Prevented a Lot of Deaths

“So-called experts from China have not been transparent, and shared numbers that we now know could never have been true. No one talks about it anymore, but it’s clear that we have received misinformation from China.

These are the same experts that told Italians ‘Don’t worry, we know how to deal with this’ when the virus hit Europe. And the first thing they say is ‘don’t do any autopsy’. This is bizarre, because when a new virus appears, and we have a first patient that dies from it — normally you would expect to see a thorough autopsy program put in place, all while taking the necessary precautions.

Italians got deceived, they followed these recommendations and did not do any autopsy. This is regrettable, and could have prevented a lot of deaths, including in France.

[…] They waited until March to finally do autopsies, and learn how the virus impacts the human body. This is another scandal, no one talked about it, no one seems to do a big deal out of it.”

3- The Median Age of COVID Deaths Is Equal to Life Expectancy, But No One Mentions That Fact

We didn’t talk enough about the median age of COVID deaths, which was around 81 years old — which is telling. This age is equivalent to life expectancy. I don’t understand why no one talked about it!

“The immune system is a precious health resource that we can nurture: By exercising, by avoiding being locked down for 2 months, by oxygenating your body — which means, avoiding putting a mask on, by eating well, which means being able to go out to buy healthy foods.

We’ve done the opposite. We’ve done everything to suppress the immune system.

Another thing that can disturb the immune system is being stressed. If I put you in a quarantine in a room of this studio, and then I scare you all the time, I can guarantee that your immune system will be negatively impacted, and that you’ll be likely to get sick — not because you had previous co-morbidities, but because your body is less likely to be able to naturally fight the virus or bacteria.”

“Do you think we are in trouble? […] Yes, we can agree we were in trouble back in March, but now we are today, which means we can benefit from data and observations we’ve gathered in the last months — including what drugs to use […].

Now, we know how to treat COVID cases. We are also seeing COVID fade out. Yes, we are seeing more cases, but it’s important to not make the mistake of thinking we are still in the middle of a pandemic. […] In most European countries, the pandemic is over [since early May]. 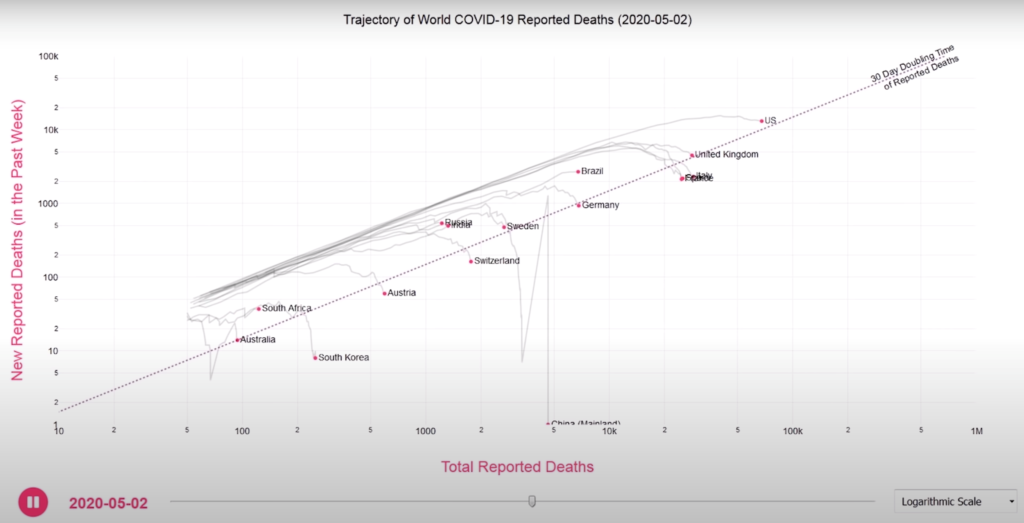 In countries where COVID is still spreading like India and Brazil, the curve is slowing down — it’s starting to take more and more time for the number of deaths to double. This means the virus is globally losing steam. […] Is it because the virus is losing strength or because we know how to treat COVID better… I don’t have the answer.”

6- There’s No Significant Excess Mortality, We Should Probably Not Even Call This a Pandemic Anymore, And a Second Wave is a Bizarre Idea

“I simply do not understand why we’re doing so much now that there’s reasonable doubt that we should even call this a pandemic, on a global level. Compared to previous years, we have not seen an increase in excess mortality which is normally associated with a pandemic.

We are around 650,000 deaths worldwide, if we believe the numbers. […] The numbers are scrambled, but at the end of the day, all that matters is: Are we seeing excess mortality? And the reality is that this excess mortality is not significant.”

Interviewer: “It doesn’t look like the Spanish flu, at least for now…”

“Let me stop you: Not ‘at least for now’ — because looking at the curves, it’s clear that this is done. It’s over. There are scientists who say ‘there’s going to be a second wave. I would love to debate them on this show or any other platform. A second wave that follows a bell-shaped pandemic… I’ve never heard about this. I’ve been looking for it, and have not found any indication this happened before.

[…] We have to stop with this idea of a second wave. This means that it’s likely a bad idea to put a mask on a population that already has had its immune system suppressed by interventions I’ve told you about previously — including not meeting and mixing with other human beings and sharing viruses and bacteria.”

7- COVID is “An Episode of Collective Hysteria”, And Masks Are Probably a Bad Policy Considering How Often People Touch Their Faces

“If, before this episode of collective hysteria which is destroying our economy, I would have told you ‘take a tissue, spit on it 2-3 times, and keep it 2 or 3 hours on your nose’ — would you have done it? You would not have done it, and you would have said ‘she’s crazy’.

[…] It’s clearly stated on each mask packaging that they do not protect its user against COVID. The holes in the fabric are so huge that they can let hundreds of thousands of COVID particles through.

I’m not against masks when it’s used well, in a population that knows how to use them. […] We’re latin, we speak with our hands, touch our faces frequently, and by doing so are creating a sort of concentrated slew of exhaled bacteria and viruses which were supposed to have been diluted in the air — and start spreading it everywhere you touch.”

Conclusion: “I’m Saddened And Shocked That So Many of My Esteemed Colleagues Have Been Silent…”

I’m shocked, and very sad. Shocked by the fact that the global intellectual elite has been this silent — but I quickly understood that so many of my esteemed colleagues were being muzzled by their masks, and by their conflicts of interests with pharmaceutical laboratories. By decency, they have chosen not to bite the hand that feeds them.

It’s sad, because these colleagues have the intellectual capacity to denounce what I’ve been denouncing today. […] I’m also devastated thinking about what’s next: Like the idea of enforcing a mandatory vaccine. If you don’t have a vaccine, you might not be able to travel, to vote… I don’t know how far this will go.” 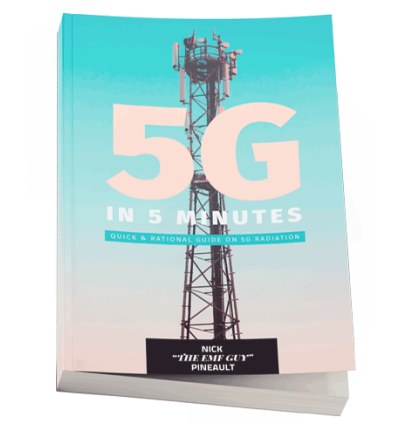 FREE REPORT: Learn The Truth About How 5G Networks Might Impact Your Health

Register to my educational newsletter on safe technologies & health and I’ll send you this “5G in 5 Minutes” report to your inbox as a free gift.

Where should we send your free guide - “5G in 5 Minutes?”

Where should we send your free guide –
“5G in 5 Minutes?”

I am a health professional *

You’ll get follow-up emails about this guide, EMF-related tips & tricks, and hear from our trusted sponsors. Opt out anytime.Full privacy policy here.