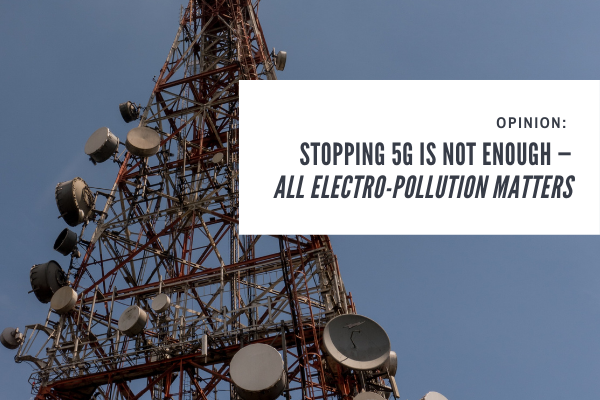 Yes, there are many reasons to be concerned about the roll-out of 5G and how it might impact our health.

But in my humble opinion as someone who has been studying EMFs and their health effects full time for several years, the fears over 5G have been distracting activists, the public and the few politicians who actually care about this matter from the real issue we’re facing globally:

The irresponsible, reckless way we’ve been rolling out unsafe technologies in the last century, ranging from wireless radiation to simple household electricity.

This article will try to illustrate why I hold this opinion which I understand may seem controversial at first.

I’ve been an advocate for safe technologies for years. I’m completely against 5G, and applaud all the efforts I’ve seen put forward to slow down or stop its rollout.

But the unfortunate fact is that even if 5G disappears from the surface of the planet… we’ll still be exposed to previous generations of cellular networks (2G, 3G, 4G-LTE) that are themselves completely unsafe — and at levels of exposure that are a quintillion times (1,000,000,000,000,000 X) higher than what your great-grandparents were exposed to back in the 1920s. 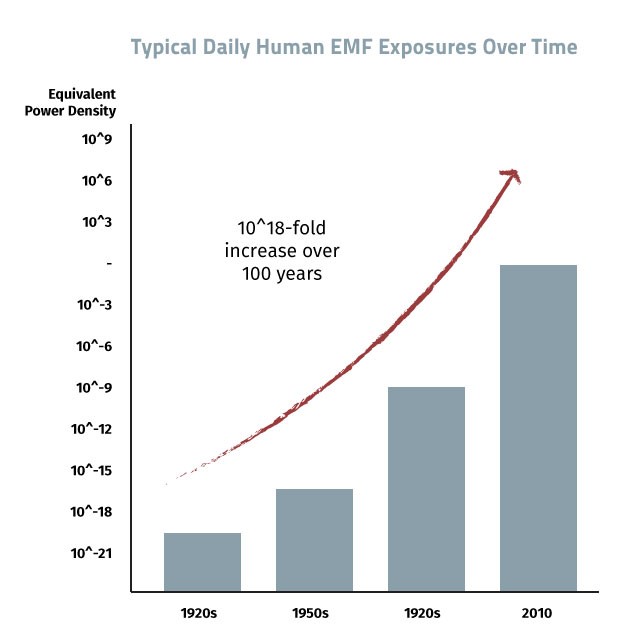 Image credit: Simplified version of a 2012 graphic by the work of Philips and Lamburn.
See the original image here for a more thorough portrait.

This bears repeating: There are no known “safe” levels of electro-pollution. In reality, scientists have found biological effects at power levels that are orders of magnitude smaller than what a smartphone or wifi router is routinely emitting.

More than 50 years ago, studies like the 1965 The Effect of Microwaves on the Central Nervous System [1] by W. Bergman had already confirmed that extremely low levels of electro-pollution can have important impacts on biology.

As reported by Professors Johansson and Flydal [2]:

“Bergman revealed all we need to conclude that radiowaves in the centimeter band influence blood circulation, respiration, temperature control, water balance, albumin and sugar concentration in the cerebro-spinal fluid, and so on.

The dosages Bergman considered are significantly below today’s maximum exposure standards. [emphasis mine] Even electromagnetic fields (EMF) at levels of only 1/100,000th (10-5) of what we are regularly exposed to from mobiles, are found to disturb the complex electrical operations taking place at cellular levels, and to cause damage to DNA, proteins, neurons and oxidation processes.”

In early 2018, the results of a 20 year long saga finally came in. The National Toxicology Program (NTP), a federal interagency group under the National Institutes of Health, studied large groups of rats and mice in order to find out if the radiofrequency radiation emitted by cell phones, wifi and Bluetooth devices is carcinogenic… or not.

The conclusion was unequivocal: There is “Clear Evidence” that these disruptive signals are carcinogenic in rats [3].

Unsurprisingly, the FDA — who had nominated cell phone radiation to the NTP in 1999 — swept those results under the rug, arguing that “these findings should not be applied to human cell phone usage” and that “[they] believe the existing safety limits for cell phones remain acceptable for protecting the public health”. [4]

But here’s the twist: In the NTP study, rats and mice were exposed to older 2G and 3G signals emitted by signal generators — not real cell phones which now emit much stronger, and much more disruptive 4G-LTE radiation.

This is especially concerning for two reasons:

a) This clearly shows us that the speed at which we are able to roll out new unsafe technologies is way faster than our ability to study them. By the time we’re able to study 4G, we’ll likely already have been exposed to 5G, 6G and beyond.

b) It’s well recognized that signals emitted by signal generators (“simulated EMF-emissions”) are much less disruptive to biology compared to real wireless devices such as a smartphone.

In their 2015 review, Panagopoulos and his colleagues explain that [5]:

“While experimental studies employing simulated EMF-emissions present a strong inconsistency among their results with less than 50% of them reporting effects, studies employing real mobile phone exposures demonstrate an almost 100% consistency in showing adverse effects. [emphasis mine] This consistency is in agreement with studies showing association with brain tumors, symptoms of unwellness, and declines in animal populations.

[…] We conclude that, in order for experimental findings to reflect reality, it is crucially important that exposures be performed by commercially available mobile phone handsets.”

Previous generations of cellular networks are clearly unsafe, and so are all types of wireless devices including wifi routers, Bluetooth-enabled headphones or wearables, “smart” utility meters, and countless others.

There are many reasons to believe that 5G frequencies in the higher “millimeter wave” range will be just as unsafe as all previous wireless technologies.

“[..] The addition of this added high frequency 5G radiation to an already complex mix of lower frequencies, will contribute to a negative public health outcome both from both physical and mental health perspectives.

[…] Because this is the first generation to have cradle-to-grave lifespan exposure to this level of man-made microwave (RF EMR) radiofrequencies, it will be years or decades before the true health consequences are known. Precaution in the roll out of this new technology is strongly indicated.”

This is not scientifically correct. As my colleague and top EMF mitigation specialist Brian Hoyer reminded me recently, the visible light spectrum ranges from 375,000 to 769,000 GHz in frequency!

As I’ve discussed in length with top EMF engineer Pawel Wypychowski on my podcast “Smarter Tech” [7], what makes certain types of electromagnetic fields more disruptive or stressful than others is not necessarily their intensity (power) or even frequency, but other characteristics that make them completely foreign to our biological “sensors”, such as:

For this reason, I think we should be just as concerned about the lower-frequency 5G towers that are being installed everywhere, and all other sources of wireless radiation, than we are about these millimeter waves.

What Now? How Can You Protect Yourself?

I know from experience that the entire topic of how we can deal with electro-pollution (EMFs) may feel overwhelming and scary at first. This is how I felt years ago before I decided to dedicate my life to try and fix this global problem.

But I also recognize that knowing exactly what you can do about it — and taking action on that information — can lead to a greater sense of empowerment and relief.

Here’s what you can do to protect yourself — and future generations — from this growing problem:

1) Help spread awareness about ALL sources of electro-pollution, not just 5G.

5G awareness has exploded this year and stirred a lot of controversy, but I’m under the impression that things are still progressing overall.

We need these debates to happen, and we need decision makers to take a stand, but not just against 5G. They need to be asked the question: Are you against or for more electro-pollution?

If you want to stop the 5G rollout at a local level, check out 5G Crisis. For a larger discussion about what we do want, and how we should replace 5G, 6G and future wireless infrastructure with safer technologies, check out the SafeG Alliance.

2) Reduce your exposure to ALL sources of electro-pollution, not just 5G.

Cell phones, tablets, wifi routers, Bluetooth-ready devices, but also electric fields, magnetic fields, dirty electricity, and even artificial light. All these are sources of electro-pollution that can prevent you from feeling your best and achieving greater wellness.

Your goal should be to minimize your exposure to all the sources you and your family have control over, as much as you can. Aim for progress, not for perfection.

If you liked my article and want to learn more, do not miss the free webinar I’m giving in collaboration with top EMF mitigation specialist Brian Hoyer this Monday May 24th at 8PM EDT.

We will do a deep dive on 5G, how it might impact your health, and teach you how to protect yourself from all sources of electro-pollution.

You can register for free at: https://electropollutionfix.com/5gweb 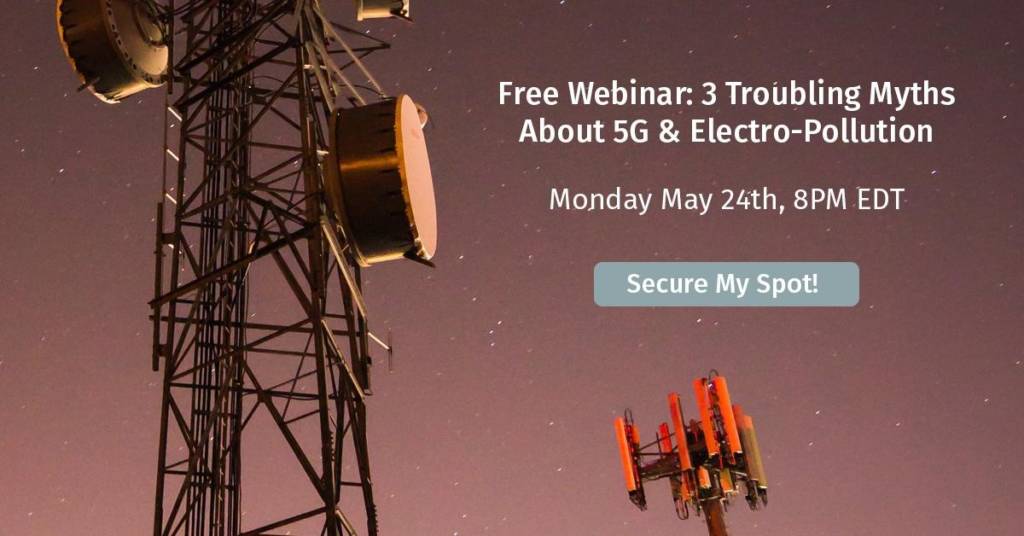